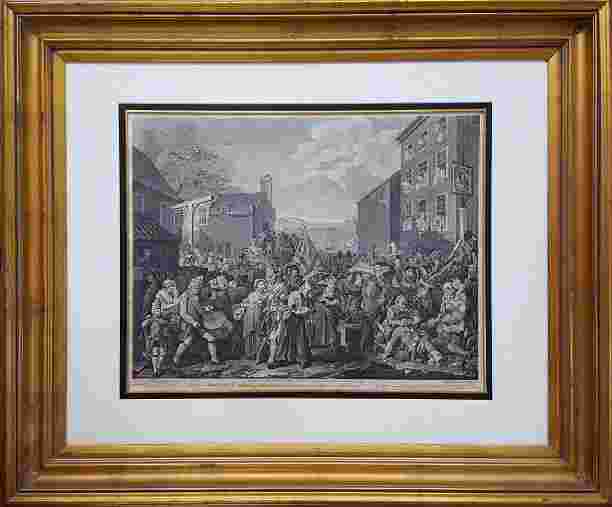 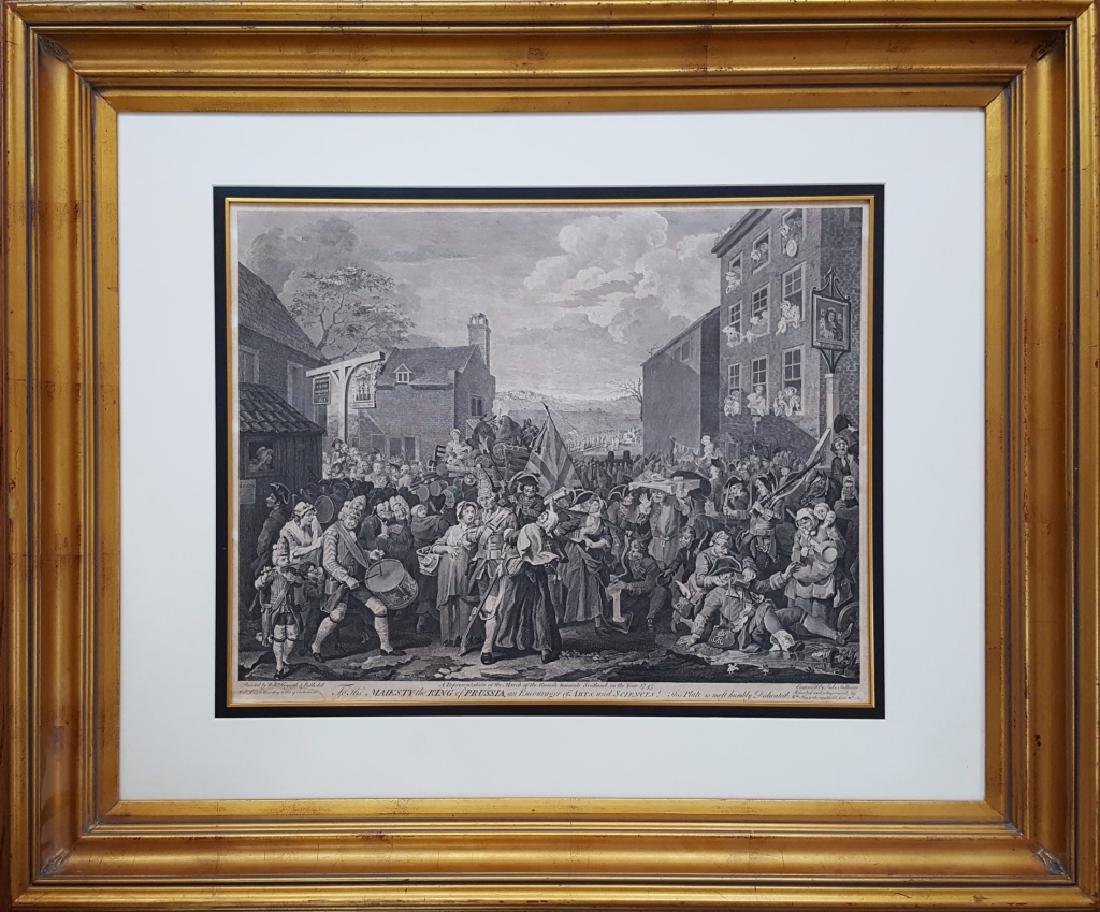 A copper plate engraving on wove paper after English artist William Hogarth (1697-1764) titled "The March to Finley (A Representation of the March of the Guards towards Scotland in the Year 1745). Engraved by Irish engraver Luke Sullivan (1705-1771) though 're-touched and improved' by Hogarth in 1761. The example here is the later edition printed from the original plate published by Baldwin, Cradock, and Joy in 1822. There are many other 'Hogarth' prints that were printed but are merely copies, not like what we offer here - from the original plate originally published in 1761. The image is after Hogarth's 1750 oil on canvas painting "The March of the Guards to Finley". Reference: Paulson 1970.237 viii/viii, Paulson 1989.184 viii/viii; British Museum Satires 2639; Dobson and Armstrong p. 211. Framed in archival double matting with filet and gold frame. Framed size: 31" x 37". Image size: 16.5" x 21.5". Small damp-stain lower left outer margin and some light toning consistent with age, a strong impression. In overall very good condition. (Please see pictures). This engraving is in many permanent museum collections including The MET, The British Museum, Tate, National Gallery of Victoria and more.
"The March to Finchley"; scene at Tottenham Court (after the painting in the Foundling Museum) with soldiers gathering to march north to defend London from the Jacobite rebels; the crowd includes, in the foreground, a man urinating painfully against a wall as he reads an advertisement for Dr Rock's remedy for venereal disease, an innocent young piper, a drunken drummer, a young soldier with a pregnant ballad seller (her basket contains "God Save our Noble King" and a portrait of the Duke of Cumberland) and a Jacobite harridan selling newspapers, a milkmaid being kissed by one soldier while another fills his hat from her pail, a muffin man, a chimney boy, a gin-seller whose emaciated baby reaches for a drink; in the background a boxing match takes place under the sign of Giles Gardiner (Adam and Eve), a wagon loaded with equipment follows the marching soldiers and, to right, prostitutes lean from the windows of a brothel at the sign of Charles II's head; beyond the sunlight shines on Hampstead village on the hill.
William Hogarth FRSA (10 November 1697 â€“ 26 October 1764) was an English painter, printmaker, pictorial satirist, social critic, and editorial cartoonist. His work ranged from realistic portraiture to comic strip-like series of pictures called "modern moral subjects", perhaps best known being his moral series A Harlot's Progress, A Rake's Progress and Marriage A-la-Mode. Knowledge of his work is so pervasive that satirical political illustrations in this style are often referred to as "Hogarthian".
Hogarth was born in London to a lower middle-class family. In his youth he took up an apprenticeship where he specialised in engraving. His father underwent periods of mixed fortune, and was at one time imprisoned in lieu of outstanding debts; an event that is thought to have informed William's paintings and prints with a hard edge.
Influenced by French and Italian painting and engraving, Hogarth's works are mostly satirical caricatures, sometimes bawdily sexual, mostly of the first rank of realistic portraiture. They became widely popular and mass-produced via prints in his lifetime, and he was by far the most significant English artist of his generation.
Luke Sullivan (1705-1771) was an Irish portrait painter, miniaturist and engraver active in London. He was a student of Thomas Major and engeaved much after Hogarth.