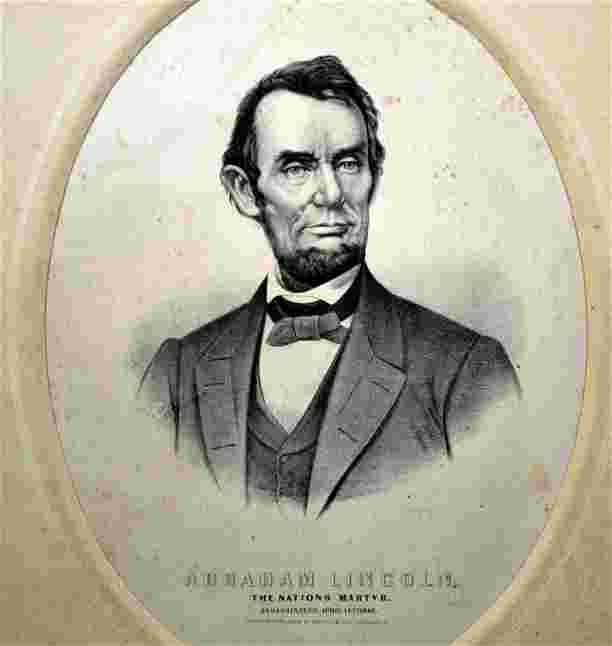 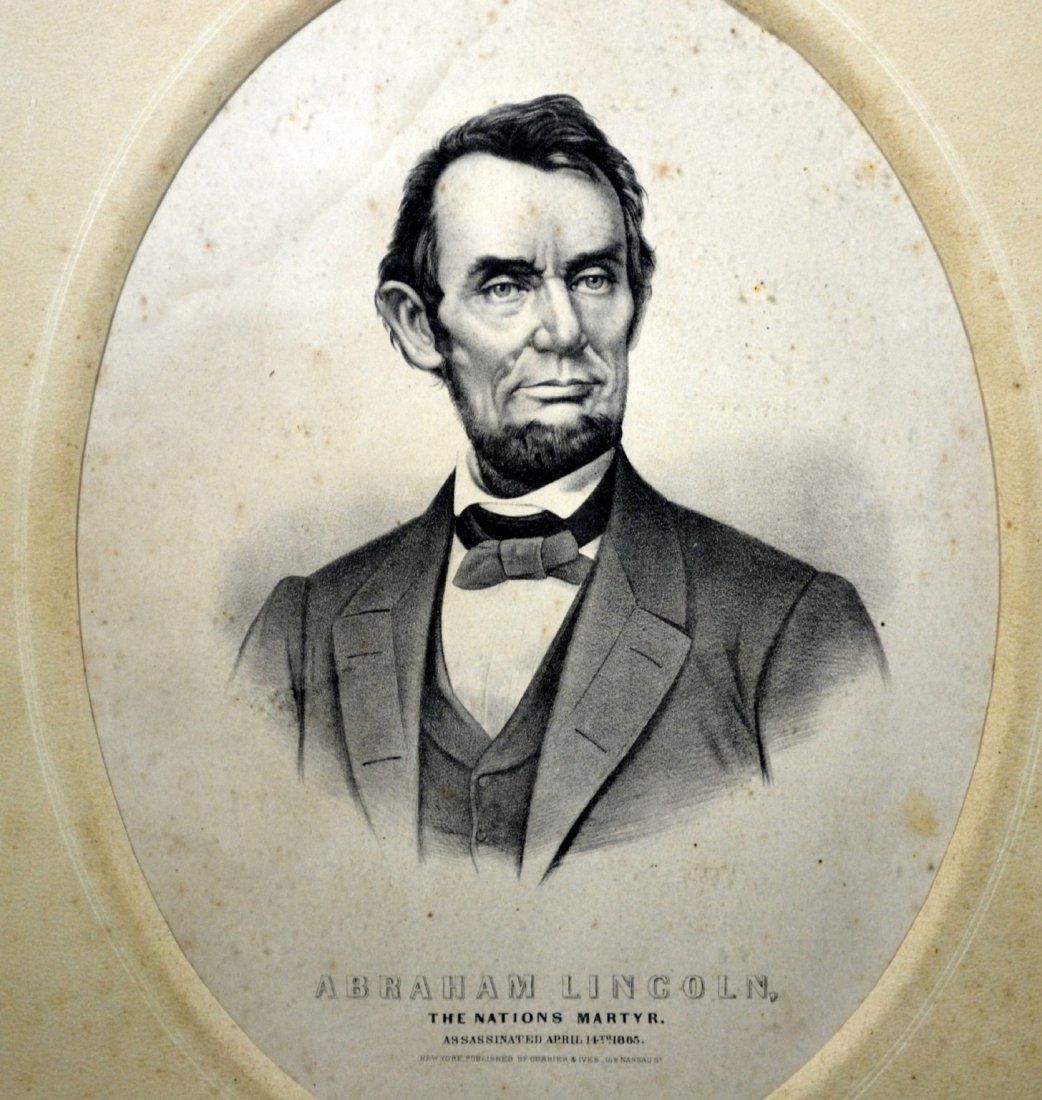 Title: "Abraham Lincoln The Nation's Martyr"
Publisher: Currier & Ives
Description: Depicts President Abraham Lincoln and reads the date of his assassination date.
Date: Circa 1865
Frame: Later
Framed Size: 26.5" H x 22" W x 1" D
Work Size: 16" H x 12" W
Weight: 11 pounds
Condition: Examined out of frame, not laid down. Some foxing.
History: Abraham Lincoln(February 12, 1809 – April 15, 1865) was the 16th President of the United States, serving from March 1861 until his assassination in April 1865. Lincoln led the United States through its greatest constitutional, military, and moral crises—the American Civil War—preserving the Union, abolishing slavery, strengthening the national government and modernizing the economy. Reared in a poor family on the western frontier, Lincoln was self-educated, and became a country lawyer, a Whig Party leader, Illinois state legislator during the 1830s, and a one-term member of the United States House of Representatives during the 1840s.After a series of debates in 1858 that gave national visibility to his opposition to the expansion of slavery, Lincoln lost a Senate race to his arch-rival, Stephen A. Douglas. Lincoln, a moderate from a swing state, secured the Republican Party presidential nomination in 1860. With almost no support in the South, Lincoln swept the North and was elected president in 1860. His election was the signal for seven southern slave states to declare their secession from the Union and form the Confederacy. The departure of the Southerners gave Lincoln's party firm control of Congress, but no formula for compromise or reconciliation was found. Lincoln explained in his second inaugural address: "Both parties deprecated war, but one of them would make war rather than let the Nation survive, and the other would accept war rather than let it perish, and the war came."When the North enthusiastically rallied behind the national flag after the Confederate attack on Fort Sumter on April 12, 1861, Lincoln concentrated on the military and political dimensions of the war effort. His goal was now to reunite the nation. He suspended habeas corpus, arresting and temporarily detaining thousands of suspected secessionists in the border states without trial. Lincoln averted British recognition of the Confederacy by defusing the Trent affair in late 1861. His numerous complex moves toward ending slavery centered on the Emancipation Proclamation in 1863, using the Army to protect escaped slaves, encouraging the border states to outlaw slavery, and helping push through Congress the Thirteenth Amendment to the United States Constitution, which permanently outlawed slavery. Lincoln closely supervised the war effort, especially the selection of top generals, including commanding general Ulysses S. Grant. Lincoln brought leaders of the major factions of his party into his cabinet and pressured them to cooperate. Lincoln's Navy set up a naval blockade that shut down the South's normal trade, helped take control of Kentucky and Tennessee, and gained control of the Southern river system using gunboats. He tried repeatedly to capture the Confederate capital at Richmond, Virginia. Each time a general failed, Lincoln substituted another until finally Grant succeeded in 1865.An exceptionally astute politician deeply involved with power issues in each state, Lincoln reached out to War Democrats and managed his own re-election in the 1864 presidential election. As the leader of the moderate faction of the Republican party, Lincoln found his policies and personality were "blasted from all sides": Radical Republicans demanded harsher treatment of the South, War Democrats desired more compromise, Copperheads despised him, and irreconcilable secessionists plotted his death. Politically, Lincoln fought back with patronage, by pitting his opponents against each other, and by appealing to the American people with his powers of oratory. His Gettysburg Address of 1863 became the most quoted speech in American history. It was an iconic statement of America's dedication to the principles of nationalism, republicanism, equal rights, liberty, and democracy. At the close of the war, Lincoln held a moderate view of Reconstruction, seeking to reunite the nation speedily through a policy of generous reconciliation in the face of lingering and bitter divisiveness. Six days after the surrender of Confederate commanding general Robert E. Lee, however, Lincoln was assassinated by actor and Confederate sympathizer John Wilkes Booth. Lincoln's death was the first assassination of a U.S. president and sent the nation into mourning. Lincoln has been consistently ranked both by scholars and the public as one of the greatest U.S. presidents.
Meta: engraving, etching, lithograph, hand colored, chromolithograph